IPv4 addresses are 32 bits in length (that’s 0s and 1s) and IPv6 addresses have 128 bits (of 0s and 1s). The news is also, that we use hexadecimal notation and colons : to display the new addresses!

How an IPv6 address is displayed

You get used to the new notation quickly, I promise!

1. there are 8 groups with 4 hexadecimal digits each

This is a real and complete IPv6 address! But it is a bit long, so it can be shortened and still be valid and complete:

1. leading zeros can be omitted:

2. groups of zeros can be replaced by double colon :: (only once per address, to be unique!):

Types of Communication in IP

In network communication and independent from the protocol version (v4 or v6) there are different types and scopes that we will review now. If you already know about these types, you can skip ahead if you like or use it as a recap.

Sending a message to a single, unique address (destination)

Sending a message to multiple destinations simultaneously. Ethernet and IPv4 use broadcast addresses to reach all clients on the local network!

Sending a message to a group (destination) simultaneously, targeting only group members. This is used regularly in IPTV, where you can subscribe to the corresponding multicast group and then received the corresponding TV channel stream over the Internet, instead of receiving all channels all the time.

Sending a message to a single, unique address (destination), that is used by multiple hosts. The nearest host is automatically selected. In most implementations BGP is used and the lowest hop count (lowest distance) to the target address is used. Anycast is regularly used for global DNS deployments, like with Google’s 8.8.8.8 DNS service or Cloudflare’s 1.1.1.1 DNS service

Communication Types for IPv4 and IPv6

Broadcast was used with IPv4 but is not used with IPv6 anymore, because the amount of addresses in a single IPv4 network was limited or at least much less, so reaching everybody on the network could be handled. Broadcast in IPv4 was also used to make sure the address, received by DHCP, was unique. The same does not scale at all for the very large IPv6 networks, so the use of broadcast transmission was removed from the new protocol specifications.

Different address scopes are used to define which kind of reachability an assigned address has. This helps scale the network and could also be used as a security measure. In best practice I would still highly recommend only using addresses from Global Scope (Universal Scope) and securing your network with a firewall.

The different address scopes for unicast are:

An address from a link-local scope is only valid on the directly attached link (link-local, loopback) . It cannot be routed or reached from outside of this scope.

Addresses from the Unique Local Scope (Unique Local Addresses, also known as ULA) are similar to IPv4 private address ranges from RFC1918, such as 10.0.0.0/8 and so on. They are routable within a private organization and not supposed to be routed publicly on the Internet. Thus, the reachability (scope) of this IPv6 address type is limited to the organization. The same network range can be used by different companies and private entities at the same time, so they are not unique.

Addresses from the Global Scope, also known as Universal Scope, are public IPv6 addresses with global reachability. This scope has no limitations, is fully unique and registered via the corresponding Regional Internet Registry (RIR) to a provider (Local Internet Registry, LIR) and then assigned to an end user or party.

The Site Local Scope has been deprecated, which means it is not used anymore, as per RFC3879 from 2004. It was created to address sites locally, independent from organization, similar to a part of RFC1918 private IPv4 addresses.

In Multicast, the 4th nibble (4th digit of the address) defines the scope of reachability (ff0S::)

Subnetting can be fun if you have understood the basics. We will do a quick review of IPv4 subnetting here and then move on to the differences with IPv6 subnetting.

How to Subnet IPv4 Addresses and Networks

IPv4 defines a network address and a broadcast address. Since the late 1990s, only Classless Inter Domain Routing is used, also known as CIDR, so the notation is always as follows:

The Internet has many IPv4 Subnetting cheat sheets and calculators. My favorite quick reference is the one from Europe’s RIR, RIPE NCC: 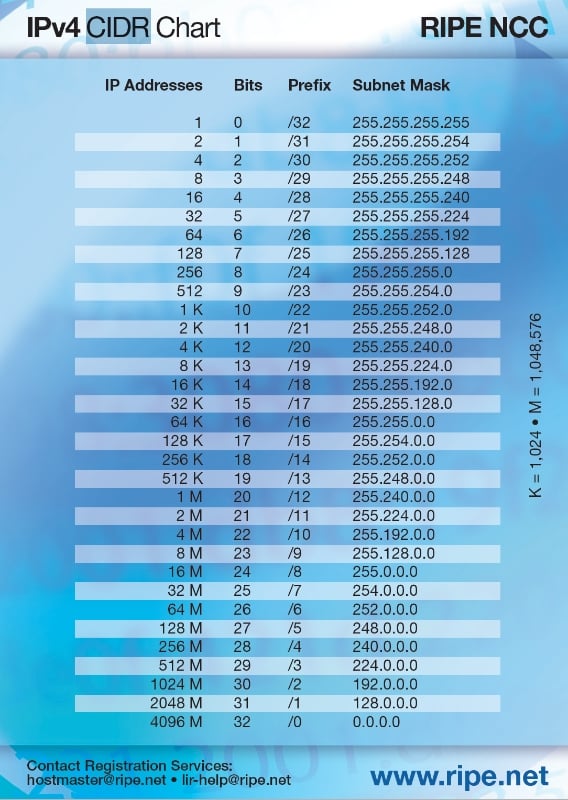 How to Subnet IPv6 Addresses and Networks

Well, now that you remember how subnetting with IPv4 works, and you know we had 32 bits of address with IPv4 – how does that work with IPv6? Will it be 4 times more complicated? 2^96 times? No!

In IPv6 we have no (reserved) network address

Our prefix length is always specified in slash notation, e.g. /64 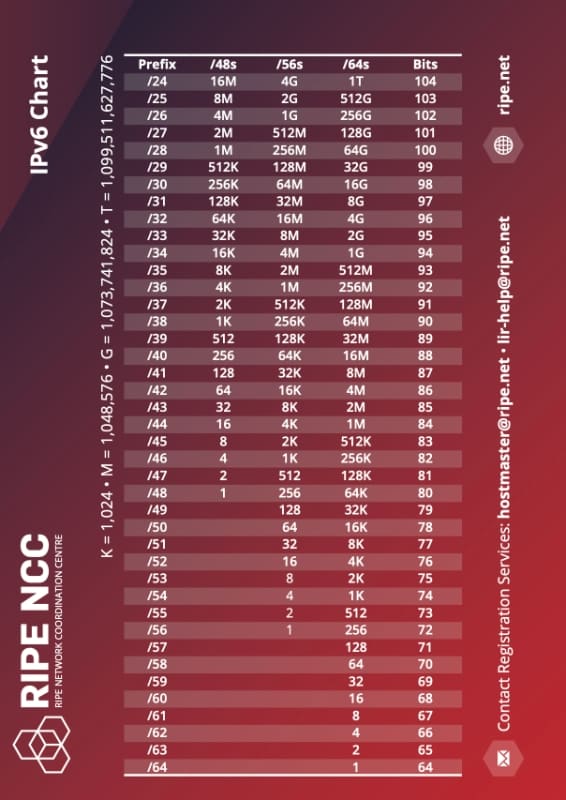 Special IPv6 Addresses you should remember

There are some special and reserved addresses, which are:

We have some special and reserved addresses for Multicast use:

What is IPv6 | Technology explained